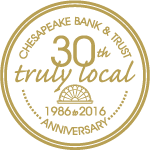 December 2016, Chesapeake Bank & Trust celebrated 30 years of truly local service to the community. We like to say we are community banking at its best.

Although Chesapeake Bank & Trust Company was formed in December, 1986, our roots in Kent County go back more than 100 years. We were established as The Second National Bank of Chestertown in May 1890. The original Board of Directors rented two rooms in the Masonic Temple while the first bank building was being constructed on land purchased from T.W. Eliason. R. K. Pippin & Son completed the new structure in February 1891, and the following month the new bank opened at 239 High Street, several doors down from our present location.

In 1910, the bank was renamed The Third National Bank of Chestertown, and, shortly thereafter, we moved to the large brick building we now occupy at 245 High Street. During the Depression, our name changed again, to The First National Bank of Chestertown. A 1951 merger with the Kent County Savings Bank, which had been chartered in 1893, resulted in yet another name change to The Kent County Bank in 1954.

In December 1985, Michael Macielag, a local resident with a background in banking, learned that Maryland National intended to sell its Chestertown operation. He began a year-long campaign to purchase the two branches and organize a locally-owned bank. Macielag successfully attracted an initial group of 27 investors who collectively made the purchase possible. In September of 1986, the general public was invited to invest in the Bank through an initial public offering of stock. The offering was oversubscribed at 200,000 shares for a total of $4 million in capital. On December 15, 1986, Chesapeake Bank and Trust Company opened its doors with assets of $33 million. In May of 1991, Chesapeake Bank and Trust Company formed a Bank Holding Company, Chesapeake Bancorp. Many of the Bank’s original investors are still shareholders in Chesapeake Bancorp.